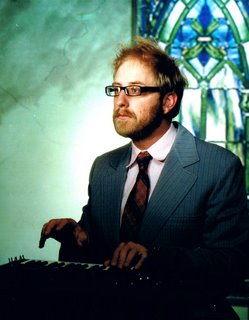 Woke up, went to Cafe Gratitude for breakfast, it’s a raw food restaurant where all the foods are named things like “I am Beautiful” and “I am Plenty Good”… I think I’d have a little too much attitude to work there-

“What do you want today?”

There is a sign over the restroom that says “I am the Bathroom”. 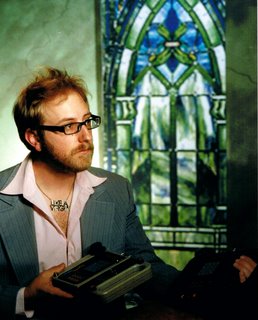 After breakfast I picked up my photos from a portriature studio on Mission. I’ve always wanted to do a K-Mart style photo shoot, but this is way cooler…

Did some laundry then went home and tried to kick out a beat for Ham-Star. That was fun, a super casio sounding 1 minute jam.

Then I went to Ross and picked out 3 bright orange button shirts for our group to use for the TV show.

I took the shirts to Miranda’s, a designer in the Mission and we laid out some cool changes for the shirts. 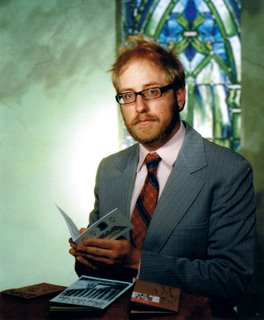 I recieved a call from the ABC crew that Zietgiest would not let us film any footage there Sunday during the Consortium of Yo meeting, so I biked over to Benders and got their permission to film there as a back up location. Yay, sundays are free bbq day at Benders.

Then I met up with Dan, a film maker from Chicago that is doing a documentary on Nerdcore Hip Hop. We shot some of my circuit bent gadgets and an interview. I think Dan has a bunch of bigger names slated for the film, but hopefully I’ll end up in the final edit somewhere.

Dan was in town originally to interview Monzy, a nerdcore rapper over at MIT. Monzy’s blog is keen btw, here is a nice example.

So, now I’ve gotta get all my crap ready for my day with the ABC guys. The goal is to get as much of my friends and their art in front of that crew.

Ummm… My instrumental was due friday, and I still have not started… damn.

One response to “Busy Saturday”