Going into the studio today

So I’ve been working on remix work for the last week, reworking some songs for Sandman and working on some art for an upcoming Robot Friend project.

Today I’m going into Studio 132 to lay down some vox to Twisting Cherry Stems. I’m using a Baddd Spellah beat and can’t wait to belt out the song. It’ll be the first time I’ve recorded in a studio in about 8 years. I’ll lay down some vox, drink some Jack, sing some more, drink some Absinthe, more vox, then a final round of Jack. Once we are done with vox, we’ll send it all up to Baddd Spellah in British Columbia for mix down and extra production.

Done some odd gigs for The Go Game, but haven’t had any luck finding a new job yet. I’m not going to rush to find something, I want it to be good and there’s the chance that I’ll be able to make full time yo-yoing work. I mean, I’ve been a full time pro before, it’s very easy for me to survive by only yo-yoing, but it doesn’t leave me much extra money to spend on things like absinthe, studios, and crafting.

Speaking of crafting, two projects in plan for tonights craft get together in the Mission. I’m going to take some of the extra fabric from my Love Life bag and make a wallet. I’ve already got the templates worked out, just need to sew ’em. I’m also going to try to repair those piece of shit Worn Again shoes using some of that extra material. I’ve never worked with shoes before though, I’m assuming it will take a lot of glue and some weird stitching angles. Bethanne might bring her propellor pasties. 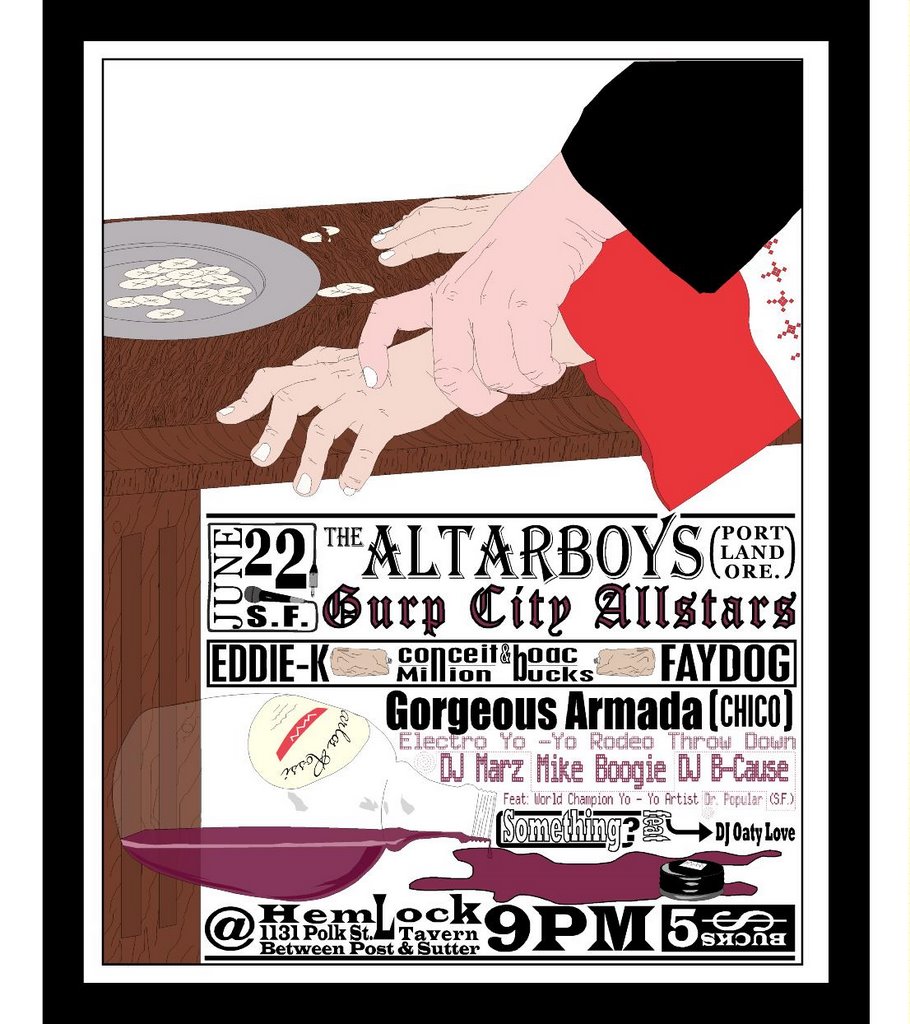 The Master of Champions episode should air next week, June 29th, but if you live in SF and have nothing to do this thursday, I’m doing a show with DJ Marz at the Hemlock Tavern, if you say “pippylongstocking” at the door, they’ll let you in for free. It’s going to be yo-yoing and scratch dj-ing.

Scream Club are also rocking out an SF Club that night too, bummer I’m-a miss them.