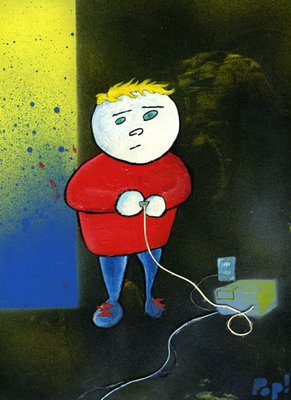 I dunno why, but this piece reminds me of Beefy. Or Mr. Bill…

In LA now, the ride was terrific, the hotel was hell hell hell!

On the ride we saw a huge brush fire, an entire field flaming right next to the road.

Then we saw a semi-truck heading north bound that lost it’s front wheel. The cab scrapped along the ground sending this his trail of bright orange sparks into the air and cutting in the road. The wheel was rolling towards our side of the highway right at us, but luckily I don’t think it ever hit any oncoming traffic.

After that, we saw some planes buzzing the fields and highways doing stunt type manuevers at 11 pm. I know your thinking “crop dusting” right? But do people really crop dust at 11pm? These planes where actually doing complex, low manuevers.

Then we passed at least 25 full size fire trucks that all where on the northbound side of the road.. for no reason. No fire, no car accident, just another “wtf is going on?” moment.

When we hit LA, Johnnie and I went to my buddy Owen’s restaurant. Owen hooked us up with dinner, then pulled out his Hitman and asked if I had any string. He had no idea who Johnnie was, so I got him to start trash talking his hitman in front of JD. Then this chick came up to me and said “You should have won on the show” then she turned to Johnnie and said “My friend thinks your cute, what’s your name?” She told us about her birthday party the following day and gave JD her number AND her friend’s number.

So, the Econo Lodge that Bride bought for us is all sorts of fucked up. The AC is broken in every room, there was a poolside party until 3 am. Finally got to sleep for a while before they began construction on the room above us… AT 6:30 AM!!!

“They are doing construction and they need to stop.”

“Well what do you want me to do about it?” said the voice on the other end of the phone. “… Okay… maybe I’ll talk to them.”

It didn’t stop. So… I’m typing this and awake and ready for the contest.