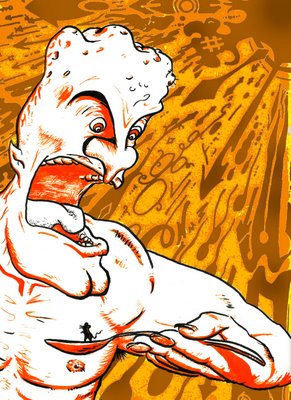 I love love love this piece! I might touch it up more, mostly focusing on the colors on the character in the foreground.

Bill Liebowitz Classic was a blast. I did a freestyle in the sponsored division. Actually I did pretty good yo, I opened with single A and rocked the twisty shit. A bunch of cats said it was the best freestyle they had seen me do in years. I actually was happy with it, at least the single a part, it fell apart quickly when I switched to five A. I really really hope somebody posts my video, I could learn a lot by watching it.

Redondo Beach was fun, it was cool seeing the kite festival and chatting about qaudlines. Johnny competed in the division which was a pretty big surprise, but on the way down to LA he told me he wished he could compete again and I said “well why don’t you?”. I had no idea he would just spontanously sign up for an event over the weekend. Neat.

The ride home was pleasantly uneventful. It was neat ’cause Johnny and I kept stopping at truck stops and just vibing on tricks. I started developing what may be the basis of my nationals routine. I wanna flesh the move out more though and see if it’s as cool as it feels right now.