one long day ahead

So I’m back in the swing of doing lots of Go Games and stuff. That’s fun, during today’s game I got recognized from the tv show a couple of times. That’s really neat considering its the very first time since the show has aired that that has happened. It was funny timing too, I was on the corner of 2nd and Howard working the game when these two girls came up to me and started asking me a bunch of questions. I just wanted to focus on the game so I kept giving them short answers and trying to get them to leave me alone. So one of the girls says, “So what are you somebody famous or something?”. “No,” I said “I’m just some guy standing on the corner with a broken laptop, fake cell phone, office chair, and some hula hoops” All of which are props for the Go Game. Right then this lady comes up and says “I just wanna say you were terrific on the tv last week. You and those two other nice boys were robbed. When it was showing your segment and it showed San Francisco on there, all of my family came running in to the room and started watching the show. You are going to go far in this world”. I thanked her and she walked away, then one of the girls said “Hey, you said you weren’t famous.” I was about to say that I wasn’t right when this white utility truck honks it’s horn and the driver yelled “Hey, Master of Champions. Yeah! Doc Popular!” as he was waving a big thumbs up.

So, those were the only two people to say anything about the show, and they were both almost in the same minute.

I have another game on Thursday and then I’m going straight to my friend Craig’s house and we are going to start a 24 Hour Comic Day. This is a challenge where an artist tries to create an entire comic book, start to finish, in 24 hours. This will be my 3rd 24 Hour Comic Book Day. Ideas, my last 24 hour comic is availlable on my store, fyi. There will be four of us in his apartment, each creating our own 24 (or more) page book.

Then on friday night I’m performing at a local Bastille Day celebration during the midnight cabaret. Info here.

So, I’ll go straight from a gig to a 24 Hour Comic marathon at 5pm. Finish at 5pm on friday, get some sleep, then go to an Bastille Day/Absinthe party at 10:30pm. Word! It’s weird because right now I’m packing my shit for the show on Friday night, like I’m just about to go to it ’cause I wont be home for a long while. 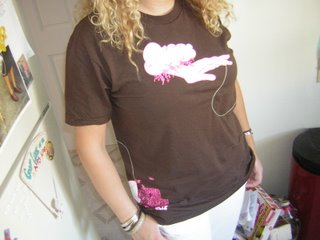 Oh, I made a cool “Hand of Yo” shirt tonight, it’s really special for two reasons. It was a misprinted shirt where the city was put on the bottom left (instead of bottom right), so I embroidered the string going all the way behind the shirt and then attaching to the hand. I also did something really neat, I sewed down a piece of yo-yo string to the shirt. Usually I just do a thick zig zag embroidery, but tonight I used this special presser foot that is usually used for rolling hems, and I used that to hold the yo-yo string in place while I did a zig zag around it. It was just a little more work, but totally cool result. I’m washing it now to see how well it handles abuse. 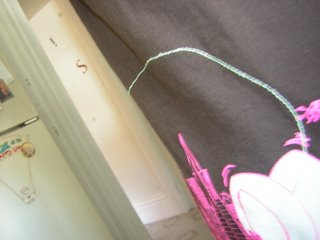