Here is a bit of a recap for the week

Wednesday I went down south to the Electronic Arts Campus in Redwood Shores to eat lunch with my buddy Nick. I got there an hour early and went straight to the free arcades. After half an hour of Tekken 3, I started practicing the game cross armed (right hand on the joystick). I ate lunch with Nick, we talked yo-yos then I went back to play all the free games I could. I love the EA campus.

Thursday evening was Cartoonist Conspiracy, with lots of new folks, and finished a new comic. We are getting ready for the San Francisco Zine Fest, hopefully we’ll have 3 or 4 new titles to sell at the table. Oh, speaking of the Cartoonist Conspiracy, one of our comics is online as a .pdf, you can read it here.

Friday was awesome, John (highlyliquid.com) is in town from Ohio so we got together at Robert’s (from Kreamy ‘Lectric Santa) house for a circuit bending and recording session. I got a short vid of us messing around here. The next step is to take the recordings and chop them up into songs. I have a copy and I’m gonna mail it to John and we’ll see what we come up with separately I guess. I put a video up of us tweaking. 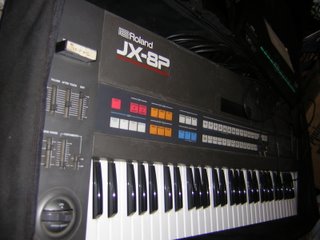 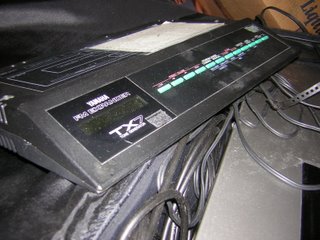 On Saturday I found a Roland JX-P keyboard and a Yamaha TX7 sound module at a yard sale on 20th and Valencia for $15 bucks. 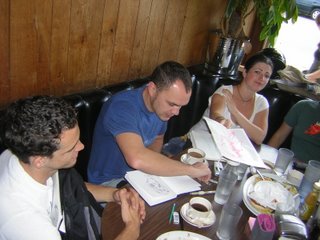 Sunday we had a Cartoonist brunch and in honor of our friend Tanya who is moving back to Edinburgh for a while. In her honor we did a series of pirate themed exquisite corpses that turned out (mostly) great. 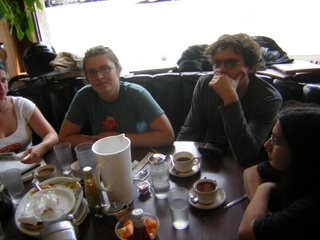 Afterwards, I went to a burning man trunk show where I had some clothes for sale.

Since then Robert asked if I’d be into playing toys and guitar and stuff with KLS. That’s sort of the best part of the week. I started playing in bands when I was 15 and started promoting punk shows when I was 16. I continued playing live shows up until I moved to St. Louis. I pretty much ain’t rocked a crowd in 6 years, that totally sucks. I’m really into the idea of making noise and sounds for somebody else’s band, and having somebody make weird noises for mine. I guess like when I was playing music with God Damn Midget. I would handle the pop stuff and song structure while Matt brought the weirdness on some songs, and we’d switch roles on other songs. So I guess for now I’ll try to jam with KLS a couple of times and see if it works out.