Make it a Lackluster Night 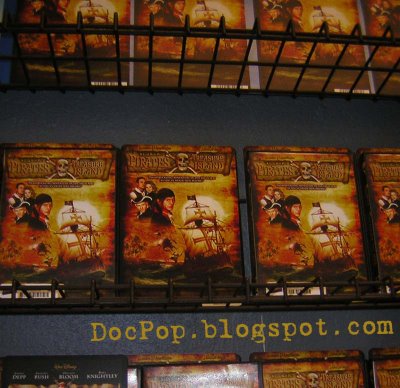 On a recent visit to a Blockbuster video store I noticed a slew of knock off movies adorning the New Release rentals. Knock offs are bad by nature, and there certainly is no fault to Blockbuster for trying to make a buck by carrying them, however, the shear number of copies they had was pretty overwhelming. They often even had more copies of the knock offs than the films they where knocking off. For example, there was a wall of Pirates of Treasure Island dvds. 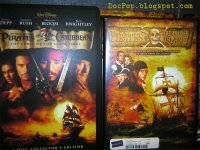 Just look at PoTI and PoTC side by side and tell me this film is supposed to stand on it own.

Underneath PoTI was a tits and ass version knock off simply called Pirate. I would assume it’s rated “Arrr!”. 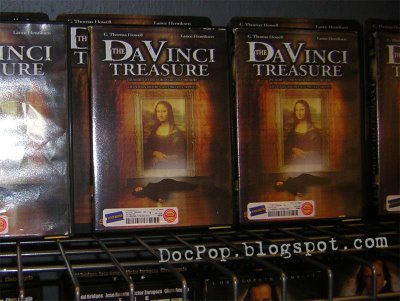 Against the opposite wall of new releases was the DaVinci Treasure. “An anthropologist must unlock the code hidden in the works of Leonardo Da Vinci in order to find the greatest treasure ever, one that could change Christianity forever. “ However obvious a Da Vinci Code rip off this may be it’s probably still better than the Ron Howard version. BTW, I like the Amazon.com info on this movie: “Budget Estimate: $0 Million”, that would probably serve as a decent plot summary as well. 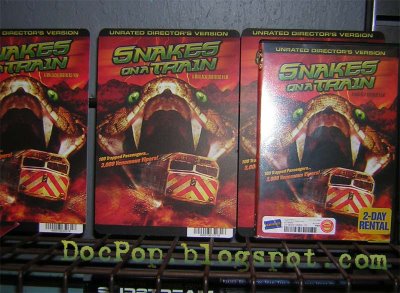 But the award goes to Snakes On A Train, for being the timeliest bad-movie-knock-off on the shelves. Of all the knock offs listed, I can at least say that Snakes On a motherfucking Train has the most original sounding spin on the movies mentioned. “Under a powerful Mayan curse, snakes are hatched inside a young woman, slowly devouring her from within. Her only chance for survival is a powerful shaman who lives across the border. With only hours to live, she jumps on a train headed for . Unfortunately for the passengers aboard, they are now trapped, soon to be victims of these flesh-eating vipers.”

Really, I’ve had it with all these motherfuckin’ imitations of motherfuckin’ average films, where’s the You, Me, and Everyone We Know rip off?

3 responses to “Make it a Lackluster Night”