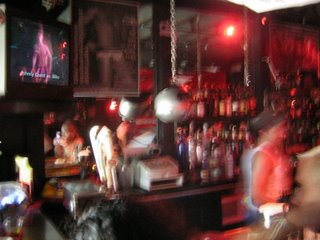 I went to the Power House in SOMA yesterday, it’s a trip. I had never really been into a “Leather Bar” venue before, it was a total trip. I asked the bartender where the restroom was and as he told me the directions he fumbled around for this large block of wood behind the bar. “Trust me Mary, you’re going to want this”. The restroom was dimly lit and as I closed the door I noticed it didn’t look or anything. The block of wood was intended to be slid onto the hook on the door, like the way old castle doors would be kept closed from the invading hoards of Vikings… ramming against it… with their huge battering rams… Oh, they want in so badly.

This all explains the funny looks I got as I headed to the bathroom.. The block in my hand was a “look but don’t touch” kind of thing.

Like most bars, there where television sets everywhere. In the Power House I guess they are very fond of watching “Naked Ultimate Fighting Cage Battles”. So the guys are jumping around, kicking, and punching, while the camera’s focus in on their freshly shaven parts bouncing around. The wrestlers had characters, and background stories, and pre-written trash talk… It was just like regular wrestling, but less gay.