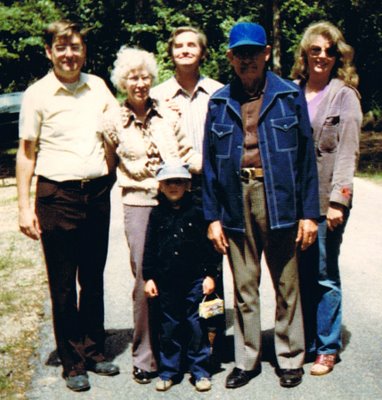 Last Saturday my dad called to let me know my grandmother had passed away. I loved my grandma and grandpa a lot, but her death was not unexpected or painful. Grandpa passed away in ’96, and since her life was centered around taking care of him, her health and mental state declined rapidly.

On Sunday I began making plans to attend the funeral reserving tickets on United Airlines, but running into a problem with my billing address. It was too late to work it out with my bank, so I had to work it out the next morning. Before I did, I checked online to make sure my address was current, then called back United Airlines but ran into the same problem. When I called Wells Fargo they confirmed my address was current but before I got off the phone the banker asked me if I knew my account was overdrawn. “You are at -$450, there have been 4 charges on your card recently for $497 each.”

I flipped out, my flight was the next morning, United had charged me 4 times and I still didn’t have a ticket, and since I was overdrawn I couldn’t buy another one. I spent about 4 hours on Monday trying to get things worked out with United. Then my phone would lose connection or whatever, and I’d have to call back and start all over! It was 7 pm, when I finally got it all taken care of, just in time to see Miranda July perform in the SOMA district.

After all that, the flight and check in where very easy. I got there extra extra early expecting someone to say “you aren’t booked on this flight” or something like that. I sat next to a larger old lady on the flight who kept her arm laying on my side of the armrest the entire flight. She was reading a book by Nora Jones titled Dare To Dream. It must have been very well written, soon after take off she had overcome her fear of dreams and was snoring in my ears.

I flew into Chicago, and rode the elevated train to my buddy Andy’s house to stay the evening. San Francisco’s always like to brag about BART, but whenever I ride another cities mass transit it always reminds me of what a great thing we have here. During one of the speedier/jerkier paths of the train we hit a bump that literally threw me out of my set and into the isle. Fuck Chicago transit.

Seeing Andy was great, he is one of my greatest friends and I finally got to meet his daughter, but… well… his daughter was having a bit of a fit, so it made it kind of hard to be like “Andy, I’m so proud of you, you are a father now!” when his daughter kept shouting “I want MOMMY!” until she finally went to bed. Then Andy and I hoped on some bikes and visited a few bars. Actually, I think it was the first time we had ever been to a bar together… It had been a long time since we had seen each other I guess.

On Wednesday I rode up with some distant family, Al and Marty Bjornson. I think we are cousins once removed or something. My family (mom and dad) where never big on “family”. I mean, I saw my grandparents and uncles, but really don’t know much about the intricacies of the rest of my family. Al and Marty however are sort of our living family historians, they love knowing ever relative, and memorizing relevant family try dates and names. Ever visit with them is fantastic, and I do wish I could see them more often.

While in Wisconsin, we stayed at my great-Aunt Francis’s house in Clinton. I remembered it very well from when I was a kid, but hadn’t seen it since I was 13. This was the first time I had seen my parents in at least a couple of years. We chatted into the evening, and I stayed up late talking about squeaky curds with Francis.

Thursday morning was the funeral and the weather was cold and rainy. The priest for the funeral gave what I felt was a very unfortunate speech that sounded more like an advertisement for the Methodist Church than the proper way to honor someone. The first thing he said was “We are gathered today, in remembrance of Ellen Westerberg, to reconnect as family and MOST IMPORTANTLY to honor Christ our Lord and Savior.” Most importantly? Who the fuck do you think you are? My grandmother used to take mom and her brothers to the Methodist church every Sunday, and would volunteer to cook and entertain at church functions however she NEVER attended a church mass because she was not a Methodist herself. But the gentleman at the podium seemed to miss that, he kept thanking the community for having him as their pastor, and saying how to get to the church and all that.. He said “Christ” over 30 times, “Jesus” 18, “God” 6, and only said my grandmothers name 3 times in his whole service.

I was very glad when my Uncle Gene took the podium to talk about grandma. He talked about all the things she had seen in her lifetime (on November 18th she would have been 100) and said the one thing that seemed to be the most important thing to her was her teaching. When my mom was a kid, grandma was the teacher at most of the schools nearby. Her schools where only one room, and she had grades 1-8 all being taught at the same time. In some towns they built a schoolroom only because she would teach in that city, there was no one else around to do it.

Gene had found a set of notes that Grandma had written in the 70s about what it was like to teach when she was younger, it was as if she was in the room telling us herself. Very beautiful.

I stayed one more night in Clinton before traveling back to San Francisco on Friday morning. It was great to share memories and see my family again, and as I look at my bank account now, I can see it is back in the positive.

The evening before the funeral, my cousin Brie had scanned several photos of Grandma from Aunt Francis’s collection. I am posting those onto a flickr account here for now.