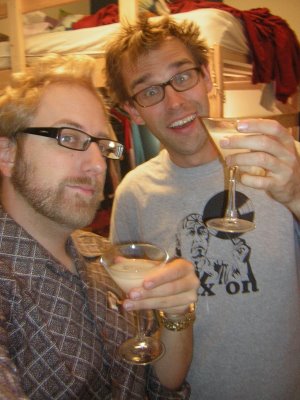 About two weeks ago I ordered a custom loft bed through WoodenLofts.com. It’s got six feet of clearance beneath it, so the idea is that I’m going to keep my “music studio” beneath it.

I asked my friend Mike to come over and check it out early last Sunday morning. We poured a couple glasses of absinthe (Pernod) and hatched the plan for a mural on the loft.

Since I’ve got a couple of audio cassette themed pieces of art in my room, I told Mike that I wanted to do a cassette piece on the loft. We chatted it out more and developed the idea into a Bosch-like setting, with angelic tapes and demonic tapes and tons of clouds. The cool part is that the clouds will be the unpainted wood, everything else will sort of be the same color as the new Bolt yo-yos.

We’ve been working on it ever since, with mike doing most of the cool illustrating parts, and me doing the bitchwork. We worked on it until 3 in the morning a few days this week. Finally, at 2am this morning, we finished it (mostly). I still need to put the final coats of lacquer on it, but I’m very happy with it! Here is a picture of the unpainted loft as Mike lays down the first sketches. I’ll post the finished studies next week. 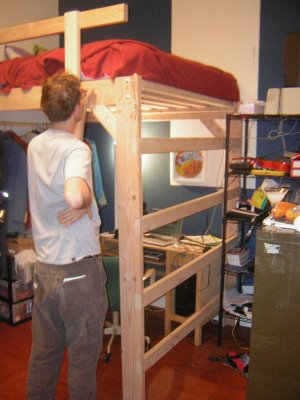