A few days ago, I did some volunteer work for 826 Valencia. A class of 20 third grade students came and, with the help of some 826 staff, created a story called The Three Jungle Friends Learn To Swim. I called my friend Mike and he came along to create some artwork for the book. I drew the 2 inside pages, and helped him ink the cover. The entire book, including our three pages of art and all the students story, was created in an hour and a half, and by the end of the trip every student had a physical copy of the book and had a chance to create their own individual ending. Here is the story: 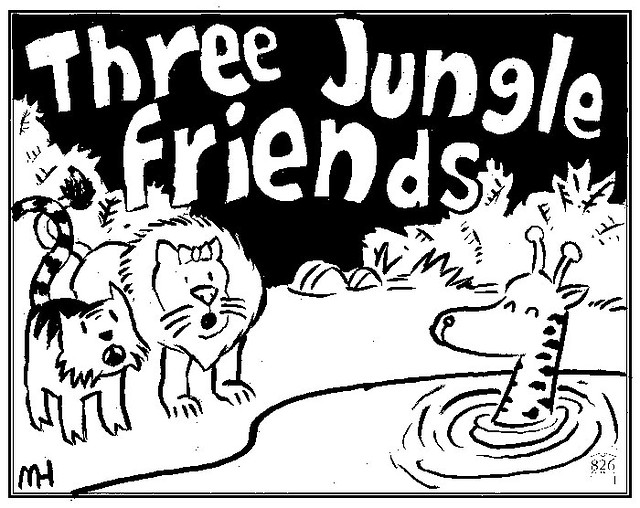 Once, in the jungle, there lived Mr. Bud, the tiger with super strong six foot long claws and a 10 foot tail! His favorite hidden cave was nestled high up in the mountains where he could keep his purple and pink stripes a secret.

His best friends were Carly the Lioness and Michelle the Giraffe, who happened to be a special short-necked giraffe. Michelle was the fastest giraffe in the jungle because she always ran every day. Carly and Mr. Bud had a dream of learning how to swim with their best friend, Michelle. However, there was one small problem, they were afraid of drowning and, of course, of The Sea Monster known as Frankie King of the Deep. The three friends vacationed at the beach on the edge of the Shadow Waters.

Carly was running so fast, she leapt over a piece of driftwood and fell into the water.

“Oh no! I have to save Carly!” exclaimed Mr. Bud. Immediately he jumped in after her and then remembered he was scared of swimming also.

Michelle heard her friends screaming as the Sea Monster surfaced… That’s the end of the group story, at this point each student was given a copy of their book, where they could write their own creative ending.

8 responses to “The Three Jungle Friends Learn to Swim”