Amok ado about nothing. 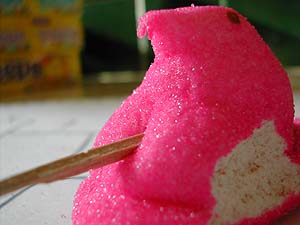 Yesterday I created a chiptune version of the classic theme to the Spock V/ Kirk fight to the death. You can hear my version here. Now I’m wondering what to do with it? I originally had my interest in the music, which originally appeared on the “Amok Time” episode of Star Trek, when my friend Jay Hathaway sent me a video he recorded of two peeps in a microwave. As I watched the video I heard the Star Trek theme in my head and decided to dig up a copy of that song to send to Jay. The next thing I knew, I had Reason open and I was constructing a video game inspired version of the song.

There seems to be a slew of Peep Jousting videos already, but maybe I could make a Kirk Peep versus Spock Peep one. Peep image via http://www.phancy.com/peeps/

One response to “Amok ado about nothing.”