I’ve always been behind the technology curve. It was 1986 when I finally talked my parents into buying an NES, that’s two and a half years after most of my friends got theirs. My next console was a Sega Genesis in 1991, again, two years late again. I still am pretty behind technologically, rocking an old ass mac laptop and a borrowed PS2. In fact, the only time I felt as though I was standing on the cusp of video game technology was when I managed to find a Sega Mega-CD on discount from a toy store in Columbia, TN and a 32X in a thrift store in Lewisburg, TN. I was the only kid on the block with either, as most of my friends were moving on to the brand new Super Nintendo, but I thought they were suckers.

Even though very few people bought the Sega add-ons, there was somehow a surplus of used Mega-CD games, and at surprisingly low prices too. Before I knew it, I had almost collected the entire Sega CD collection (although I could never find Penn & Teller’s game). Looking for more to do with my new cd-rom drive I decided to buy my first CD. Even though this was my first compact disc player, I felt that normal CDs just weren’t enough for such a cool machine, luckily there was a handful of CD+G discs that had already been available for years for me to choose from. The first CD I ever bought was Information Society’s self titled album from 1985 (reprinted into a CD+G sometime later).

CD+Gs were audio cds encoded with extra data, to be displayed visually. The Mega-CD was one of the few machines that could play these types of discs properly. CD+Gs were really just glorified karoake cds. As the music would play, the lyrics could be displayed below, accompanied by very low definition graphics that would slowly wipe or fade away every 15 seconds or so. Honestly, I had not previously been an Information Society fan, it was just fate that I would purchase their CD+G before I bought Fleetwood Mac’s or Little Feet’s. Through the infographics I learned dozens of InSoc trivia including James’ favorite chili recipe and that Kurt’s smock once belonged to Tesla.

So it was rather by chance that Information Society would be the first CD I would buy, but as I think back on it now, it was the free Sub Pop compilation that really made an impression on me. The disc, which was titled “That Virtua Feeling” for absolutely no reason, really opened me up to new music. Although it had stand out tracks by The Hardship Post and Six Finger Satellite, it was the last track on the album that really blew my fucking mind. That track was Sebadoh’s “Rebound” from one of my still favorite albums “Bakesale”. So, uh, thanks Sega and Sub Pop for including that regular CD to promote your high tech CD+G enabled console. 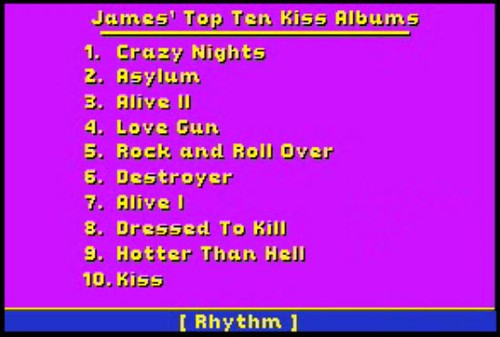 Anyways, I also ended up enjoying the Information Society CD for years and years. I’ve never seen them live, but reading a recent post on Game Music 4 All about an upcoming Information Society/8bit Weapon show reminded me of buying my first cd to listen to on tech that was already obsolete when it came out.