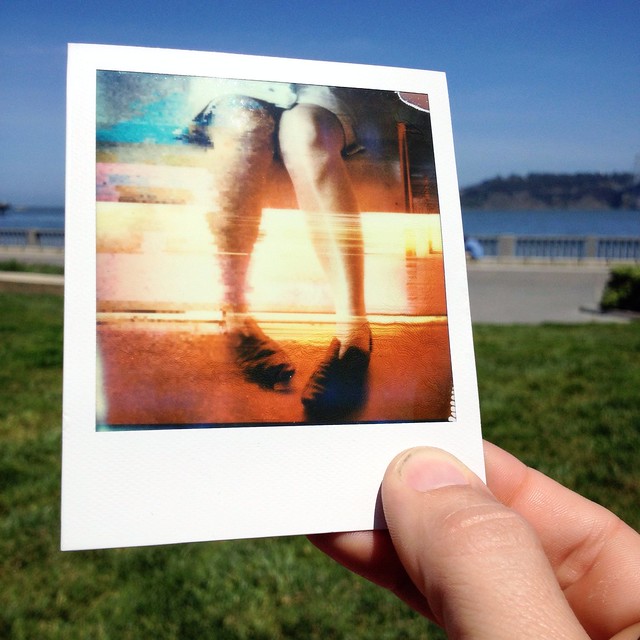 This Polaroid took 5 months to develop.

I often come across photography nerds that are either die-hard “iPhoneographers” or “analog purists”, but I’ve never felt comfortable picking a side. In the fall of 2012 I was searching for a way to able to merge my digital and analog photography together when I came across the Instant Lab project on Kickstarter. The Instant Lab is a new tool for transferring images from an iPhone screen directly onto a piece of Polaroid film.

I knew right away that this would be a perfect way to mix up my experimental iPhone photography with a real world twist, so I reached out to the IP team and started making plans for a Instant Lab photo show in late March (a week before my black and white show in the Lomography gallery). Unfortunately, the February release date got pushed back a couple months, so my show had to get cancelled. Obviously, this is the risk you run when you base y’r entire art show off of a thingy that you don’t actually own yet. All I had were the mockups I created with Instant for iOS. It sounds like things are on track now for an Instant Lab release in May (for Kickstarter backers) but I have a whole set of glitch photos that I created specifically for this format that I have never been able to see in action until yesterday. David Bais, VP of Impossible USA, did a series of Instant Lab demos at Photoworks in San Francisco and was awesome enough to let each person print out a photo of our own. The photo I selected was actually the first one in the series that I created, meaning I had literally been waiting 5 months to see how it looked on film. The result is perfect. For anyone with a history of instant film and old digital technology, it’s just freaky weird to see scan lines and errors on a Polaroid film. I’m so excited to see how the rest of the series turns out and I’m keeping my fingers crossed that I’ll still be able to find another gallery to show my pieces on in June or July.