Back from Portland (plus my Photojojo video-resume) 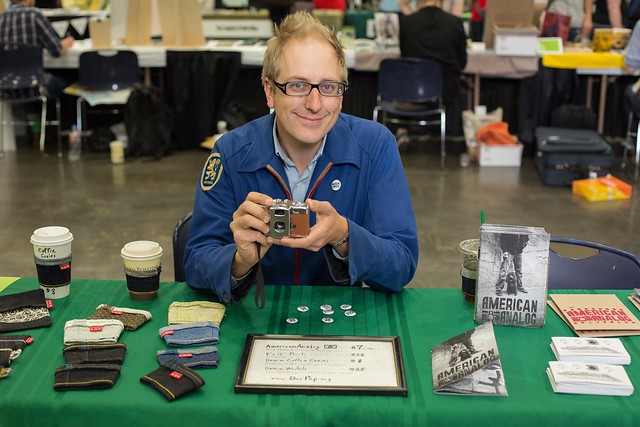 Even with some great press (like this SF Chronicle piece), I’ve honestly been in a funk lately. I’m always happy when I’m making things, but then there’s the times where I have to deal with real people stuff, like being broke and jobless. There have been a few job offers that I’ve turned down because I just don’t want to do community management stuff anymore. At least, not the Facebook contests/constant multitasking/boring stuff. There are times though, when funds are tight, I feel like I should just take any crummy community job that’s been offered to me and that I’ve wasted the last few months on stupid stuff.

So I was hoping I’d actually have a good time at Portland’s Stumptown Comics Fest (pictured above), but the lack of sales at my table just hit me when I was already feeling down. The only part of the trip that I really enjoyed, however, was all the time I had to make stuff. I spent the bulk of the 18 hour train ride to Portland working on a remix for the amazing Sean Hayes and working on some tracks in Nanoloop.

Somewhere along the ride I started getting emails from folks telling me about a new job listing at Photojojo. Seriously, I had about a dozen people forward the job to me. While traveling I felt like I didn’t have a chance to work on a resume and job application, so I put together this quick video response a temporary “resume”:

I haven’t heard back from the Photojojo team yet, but it’s been cool to see the positive reaction my video has received around the net. If I don’t end up getting the job, maybe I’ll at least be able to cash in on a “finders fee” if the folk who does get it found the job through me 🙂

edit: I never heard back from the Photojojo crew. I bumped into the person who was hiring the position and she said she never received my resume… or saw it on Twitter… or saw it on Laughing Squid. Okay.

2 responses to “Back from Portland (plus my Photojojo video-resume)”