Creating a music video in 48 hours

It was around 8:20 on Friday night when one of the Music Video Race organizers reached into a little red dixie cup and pulled out an orange ping pong ball with my name on it. A few seconds later, another organizer reached into a blue dixie cup and picked out Dave‘s name. The next 48 hours were a crazy blur of costuming, shooting, and editing… and soon I’ll be able to show you guys the result! You can come see it at the Music Video Race Premiere Party next Sunday, or wait to see it online in August. Here’s a quick recap:

The event kicked off in The Secret Alley, where I also happen to have an artist’s studio. So Dave and I headed there to listen to the song a few times and discuss ideas. There were 20 bands and 20 film makers and nobody knew who they’d be working with. I explained what the song was based on, a Mormon missionary I met in the Mission who had fallen deep into sex and drugs during their trip to SF. This started of the conversation of what this could mean for our video, during which Michel Gondry’s name came up 15 or more times. Then I mentioned the shit I’m going through trying to get my Nanoloop carts out from the hands of US Customs and that’s when our video concept came together. 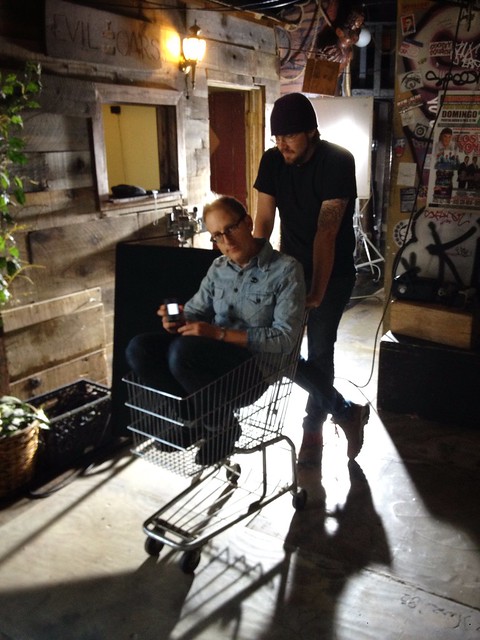 We met back in the Secret Alley the next day and Dave had brought his two assistants with him… and a shit ton of lights and gear. We started our shooting with several scenes of me just lip syncing to the song, Rumspringa. There was much fog and jumping up and down. That took about 3 hours. Then my Shalaco and Pheonix came over and brought some of their Cardboardians costumes. We set up a scene where I hung out with them… and then got eaten. 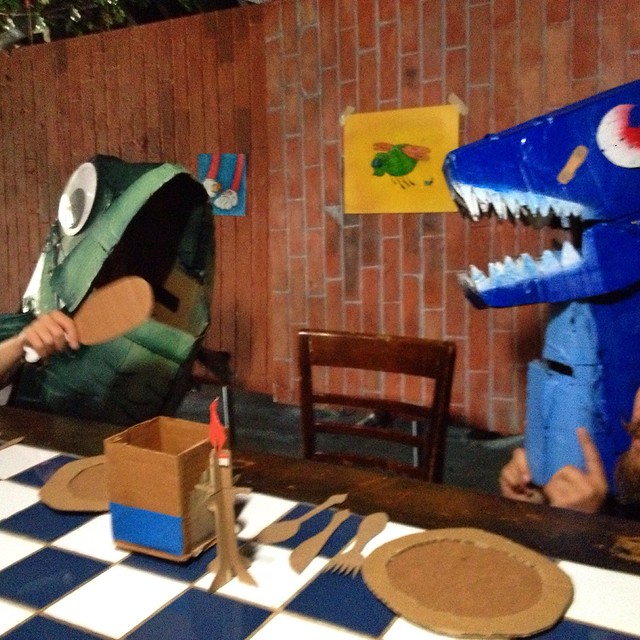 Then we headed over to DTC in Emmeryville and did the rest of our scenes. The first of which involved me being bounced around inside a cardboard box rig filled with Styrofoam. I should mention, I hate Styrofoam. When I think about it my fingernails hurt for some reason. Even so, that scene was a blast. 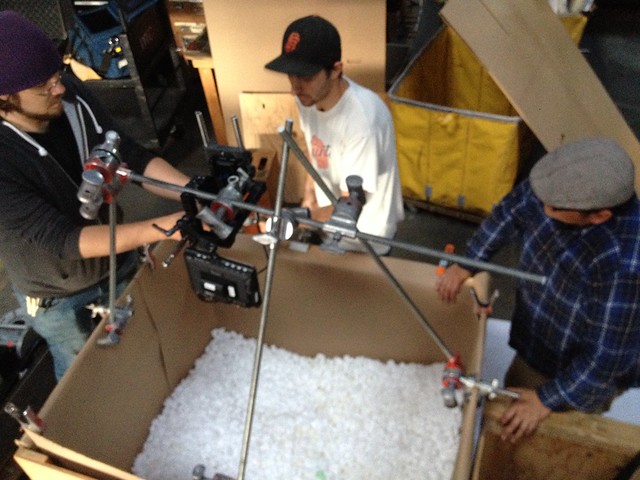 Then we did a scene with a delivery guy dropping off a box, which I open and fall into. It was already pretty late by that time, but even with rushing this whole scene turned out pretty nice. While we were shooting this, Christine was in the warehouse creating a cardboard version of a Nanoloop cart. 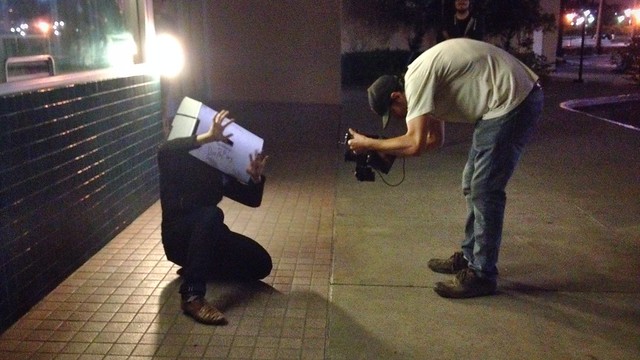 Our final big scene was my chasing Christine around a parking lot. The basic story idea was to create a surreal adventure where I nearly receive my Nanoloop carts, but they keep escaping. This whole chase scene was a lot of fun to do. We finished around midnight then headed back to the Alley to pick up one shot we missed earlier in the day.

The next day was pretty stress free for Christine and I, but I imagine it was hell for Dave. He only had a few hours to edit all this nonsense together into a music video. He did it though and we got our videos in right on time. We met up with him afterwards and he showed us the result… It’s fantastic! I’m so proud of what we made in just 48 hours. We can’t share it online until August, but if you live in SF you should come to the big MVR show at the Independent. We’ll all be showing our videos, hearing who won each division, and there will be live music. Good times.