SquirrelWarz is out now for iPads

Our new game, SquirrelWarz, is out now for the iPad! Go buy it RIGHT NOW so we can make more games! It’s only $.99… Go ahead, I’ll wait.

SquirrelWarz is a game we started working on 4 years ago when I was still at Tribal Games. We had just finished The Mighty Decider app (with the Mighty Boosh), and wanted to do a more ambitious game. So we set our sites on a real time strategy game with campaigns, multi-player web, local multiplayer, etc. Honestly, all that stuff may have been a bit ambitious. Years passed and the game never really made it out the door. Then one day my old boss, Steve, calls me up and says he just bought the rights to the game and he wants to finally get the damn thing out there. We simplified some parts, ditching the multiplayer and campaigns, rewriting large parts of the code, creating new music, etc.

The first thing most folks notice about our game is it’s hand drawn feel. Back when we (Steve, Mike, and myself) started working on games together we knew we wanted to make games that look like tangible objects. Our Mighty Decider app totally shares that same aesthetic, as does the first Knifetank game that Mike and I made. But neither of those function as well as a game as SquirrelWarz does. It mixes the look of cheap watercolors (Walgreens brand) with good gameplay and polish. It’s pretty much how I want all of my games to feel. Have I ever mentioned I have a dream of making a playable hand-painted version of Pitfall? Yo Activision, hit me up!

What was my roll in all of this? I was lead game design and sound design for SquirrelWarz. I also helped Mike out with interstitial art, UI art, backgrounds, and other stuff (but Mike’s squirrel sprites are what really steal the show). Right after Mighty Decider shipped, Steve found an article about invasive squirrel species in Britain, and asked if I could pitch some squirrel based game ideas. I pitched a couple, we picked the most challenging, then I started working on our “game bible”. This is the document that defined every possible element of the gameplay. What does the main menu look like, what happens when you touch a button, how do you interact with the units, what does combat look like. Here’s one of the earliest sketches I did (the day we decided to go with a real time strategy game): 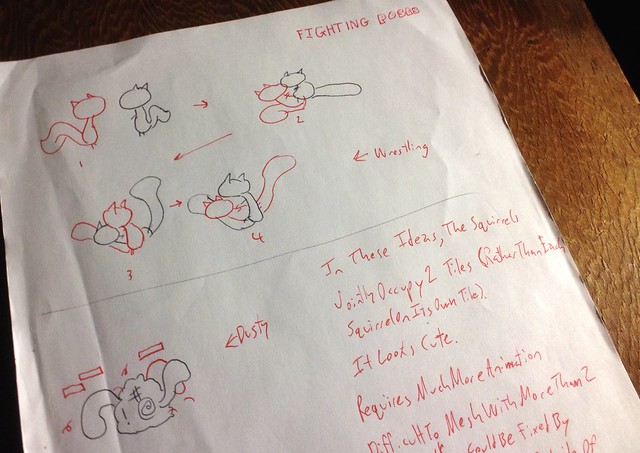 As our “bible” got finished, I then started helping Mike out with the art, which was super fun. We’d buy some cheap watercolor kits and just start making assets. I got to do all the easy stuff, while Mike focused on the much harder sprite animations. Then we both started working on maps for the game. The next step for me was music. Rather than my usual electro-chip-hop stuff, I wanted to make a sound track with toys and acoustic instruments. Something that fit the handmade feel of the game. Melodicas, mouth harps, toy pianos, and the awesome sounds of the Marxophone all played a part in our soundtrack.

So the game is out now, for iPad and should be available for Mac in September. The beauty of working on a small team like this is that I get to wear many different hats. Game design, writing, music, art, and now I’m deep in my marketing role. Promoting our game on Reddit, Twitter, TouchArcade, and anywhere else I can find. Next week I’ll be back in music and game design mode, putting the finishing touches on the original soundtrack release and making some new maps for our next big update.

Just a heads up, re-reading this I realize it sounds like I’m taking credit for the whole game, which is totes crazy. I can’t code for shit and would have driven myself crazy trying to figure out how to draw every squirrel action in 360 degrees. So shout out to all the Hales crew on the IgorLabs team. Steve Hales, the producer over at Tribal who gave me my first game design gig and later brought this project back from the dead. Mike Hales, who’s been a cartooning buddy of mine ever since I moved to SF. His art style is amazing and he’s found a perfect medium for it in the game industry. Brian Hales, who worked remotely from his pad in Utah… and I still haven’t met despite working with him on this game for 4 years. It was nice to have another Starcraft fan on the team and I can’t wait to try out his solo games.

One response to “SquirrelWarz is out now for iPads”