So Long SFBG, And Thanks For “The Best Of” award! 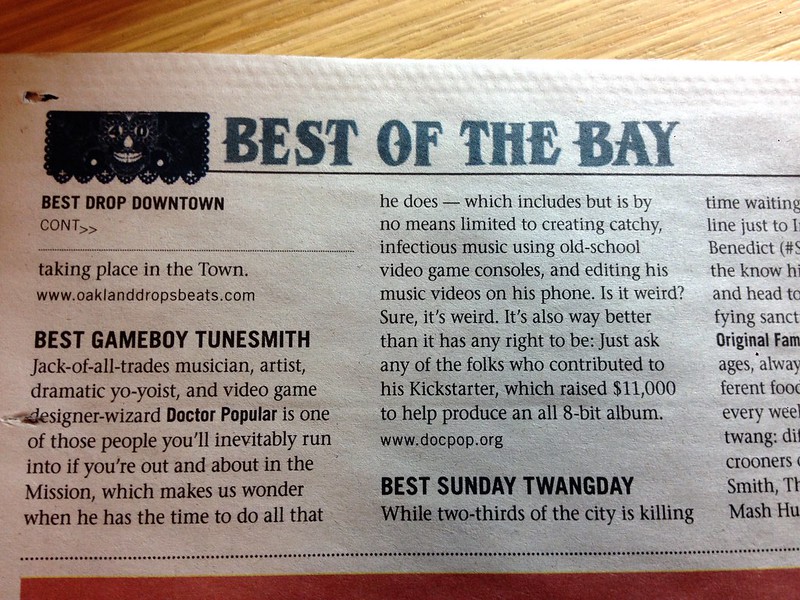 This was the first Wednesday in 40+ years without a new issue of the San Francisco Bay Guardian hitting the streets. Last week, the weekly newspaper was abruptly shut down just after they finished printing their annual Best Of Issue. Looking through this historic issue, I was stunned to find myself in there as their “Best Gameboy Tunesmith”!

“Jack-of-all-trades musician, artist, dramatic yo-yoist, and video game designer-wizard Doctor Popular is one of those people you’ll inevitably run into if you’re out and about in the Mission, which makes us wonder when he has the time to do all that he does — which includes but is by no means limited to creating catchy, infectious music using old-school video game consoles, and editing his music videos on hit phone. Is it weird? Sure, it’s weird. It’s also way better than it has any right to be: Just ask any of the folks how contributed to his Kickstarter, which raised $22,00 to help produce an all 8-bit album. docpop.org”

What a huge honor! Also, it’s a great write up, so I stole it for my Twitter bio. A couple years back I was also listed in the SF Weekly’s “Best of The Bay” issue as “Best Instagramer“, so it’s cool to have made it into both papers at some point.