I forgot to celebrate my 10th anniversary of living in the Mission! I can’t believe it’s been that long already. I came out here for a yo-yo gig at the Odeon and I decided to never go back home. Seriously.

I was living in Minneapolis at the time and my friend Kiya asked me to come out and perform at the Monsters of Yo show in the Odeon Bar (read the Squidlist post about it here). Kiya let me stay at his place over on 22nd and Valencia for a few days… then a week… then a month. The dude kept telling me how much I’d love living in the city, and he was right. My love for SF started in the Odeon, where Chicken John would push this wonderful booze called Fernet in between Dr Hal’s hilarious Ask Dr Hal show. The crowd at the Odeon was mostly burners who seemed burned out on the whole Burning Man thing. Though I never did the whole dessert art festival thing, I felt like I fit right in with this crowd of weirdos. I could show up any night and just soak in the weirdness as I drew in my sketchpad and drank shots of Fernet. 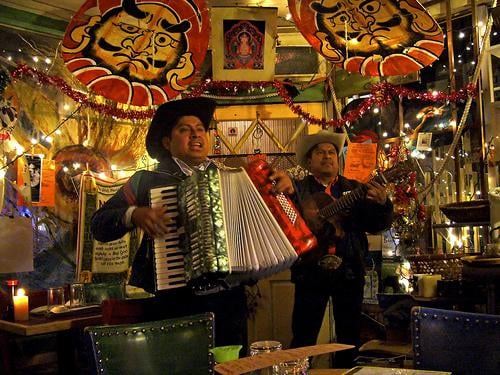 There were two great spots to eat back then too. One of them, Country Station, was a sushi restaurant owned by some eccentric hippies (who apparently were also responsible for introducing Butoh dance into the US). The restaurant was filled with random posters and crap on the walls and would often be blasting metal music. The food was cheap. Not great, not terrible… but the food was only part of the experience. What I remember the most is how everything would change when a mariachi band came in. The second a band would come in the metal music would shut off and the waiters would start handing out musical instruments to the crowd. Mostly percussive instruments, which we’d shake along with the band. The craziest part of this experience was watching the chefs. Though the rest of the staff were usually laid back, the chefs were always super serious. The chefs, who often wore their Rising Sun bandanas and long scraggly Fu Manchu mustaches, would become wildly animated and sing along with the band as they played “drums” on the sushi bar with the nearest pair of chopsticks.

The other spot I’d go to was Yamo, back when Ta Wei owned the joint. Looking back, it was sort of a precursor to the pop-up restaurant thing. Yamo was a hole in the wall Burmese diner, then Ta Wei took it over for a couple of years and really decked the place out. He’d have some old 70’s Bollywood action films playing on a 16mm projector, while he’d be playing the Shaft soundtrack on a record player. He’d often insist the name was short for “Yamo be there”. If I remember correctly, his menu only consisted of 3 vegetarian dishes, but many nights I remember only being offered one option. It was bring your own beer, with bonus points if you brought one for Ta Wei. He loved experimenting with his dishes as much as he enjoyed mixing up music and visuals. I remember watching him pour Dr Pepper into my pad thai one night, then sniffing the result approvingly before passing it over to me with a smile. You never knew what you were going to get there, which was really the Yamo’s biggest charm.

I just kept discovering great places in SF and couldn’t really deal with moving back to another Minneapolis winter. Every few days I’d call my airlines and push my return flight back a few days before I finally just stopped calling altogether. I’ve lived in the Mission ever since and I’ve never felt so happy and at home. Even now the neighborhood continues to inspire me. Thinking back on my post about how my life has drastically been changed because of one yo-yo I bought on my 21st birthday, ending up in this beautiful city all fits right in with that crazy adventure.

Huge thanks to Kiya Babazani, Chicken John, and David Capurro for their part in helping me find my home in SF.

← The Seene from Alcatraz
A Game Designers Dream →