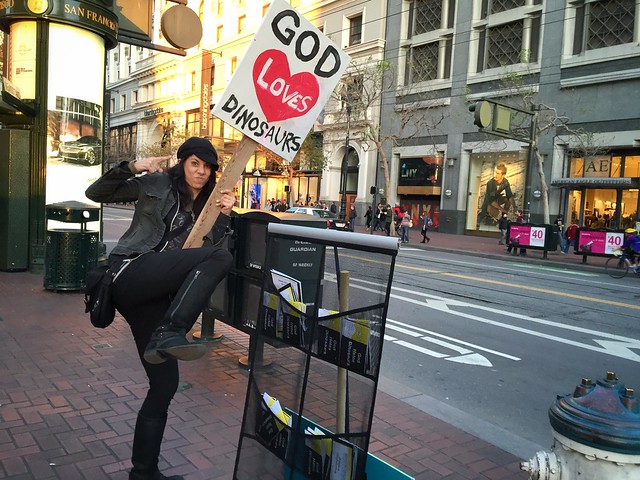 Getting counter-protested is one of the best things that’s happened to my newest art project.

I’m about 1/3 of the way through giving out 1000 copies of God Hates Dinosaurs, my fake religious book, out to strangers and still still staging “protests” about once a week in SF. So far most of these have been above the Powell St BART station. I dress up sharply and carry a big silly sign, but I don’t actually stay in character for most of these meet ups. My goal is just to make people smile and I feel like there’s a fine line between being a guy with a silly sign and being the jerk harassing passersby. So I usually err on the “Oh no, I’m not serious. Here, take a comic” side of things.

I staged one of these protests this Wednesday and had a blast. The weather was amazing and everyone already seemed to be in a great mood. There were a lot of GDC attendees in town, and they loved snapping photos with my signs (I brought extras so they could protest too). Lots of people read my sign with puzzled expressions, then smiled and gave me a big thumbs up. And I got into long conversations with other folks who had come to that same area to hand out their own propaganda, which had never really happened before. At it’s core, God Hates Dinosaurs is my counter-protest to all the folks who show up to hand out their religious pamphlets. By making this absolutely insane comic about dinosaurs, I’m trying to show just how absurd it is to think a booklet could change someone’s religious stance. So these conversations with the very people I was targeting were tense, but important for me to try my best at working through.

About 45 minutes into my anti-dino protest, a woman showed up with a huge “God Loves Dinosaurs” sign. We locked eyes and stared at each other adversarially. “Oh great, the liberal pro-dino crowd decided to show up and spread their lies.” I said. To which she replied, “Don’t believe this stuffy old nut. God loves all of his creations!” “You don’t send asteroids to your friends!” I replied snarkily.

I didn’t know that Robin, my counter-protestor, was showing up. In fact, we had never even met before. But I had hoped that someone would show up and do something similar. Before this week’s protest, I had posted on several forums about “that idiot with the sign that keeps showing up at Powell St” and how people should show up “to protest him”. I guess she found me through one of those posts and took me up on the offer.

In case you were wondering, Robin was in on the joke. As I mentioned before, I’m usually fairly passive on the street, but it was great to have someone else there to riff with and yell at. As we’d loudly debate each other, small crowds would form and watch with smiles on their faces. In the few seconds it takes people to pass by, they often miss out that my sign is supposed to be silly. Honestly, I can’t blame them. There are so many kooks out there pushing their beliefs that I’d probably miss the joke too.

By having someone else there, I was able to get into a really crazy character and say all my silly things, just to have somebody say silly things back at me. I think that works better because it makes us the butt of the joke, rather than the audience feeling like they are the ones being made fun. The end result was a better experience for everyone. Not only did viewers get that it was a joke right away, but they were more likely to get in on it. They’d pick a side and start yelling silly things too. They’d jokingly try to debate us about various loopholes in our arguments, it was great! Seriously, this was my favorite day yet. Robin was quick to quip and brought a lot positivity to the performance. I gave out a few less comics than on previous days, but learning how much better this project works with someone else to “debate” made the whole thing worthwhile.

Hopefully Robin, or anyone else who wants to join in the fun, will come and counter-protest me at future dinosaur rallies.