Some suggestions for tourists in Iceland

Going to Iceland sometime soon? Already visiting there and looking for tips? Wanna hear about the things we did and would suggest? Here’s our suggestions for tourists in Iceland:

All of the food is incredible

In all of our pre-trip research, nobody told us the food was going to be so good. Seriously, wherever you go it’s bound to have fresh and surprisingly high quality ingredients in it. Someone mentioned to us that Iceland sort of skipped the industrial revolution. It sort of went straight from agrarian to modern. My theory is that they skipped the whole industrial food trend that hit everywhere else. So whether you are at some gas station way out in rural Iceland, or some cafe in downtown Reykjavik, the food was sourced from some nearby farm and prepared fresh that day. 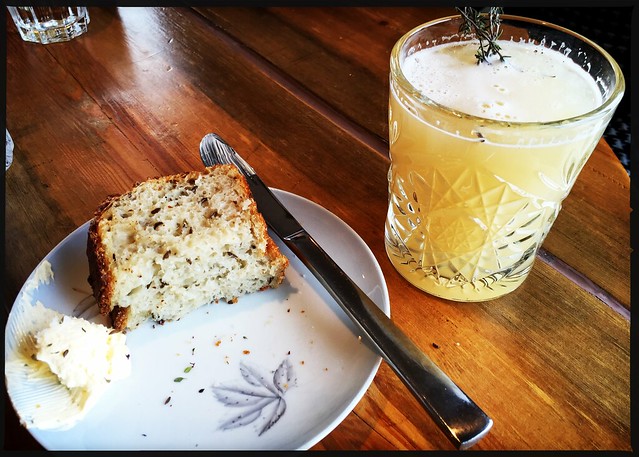 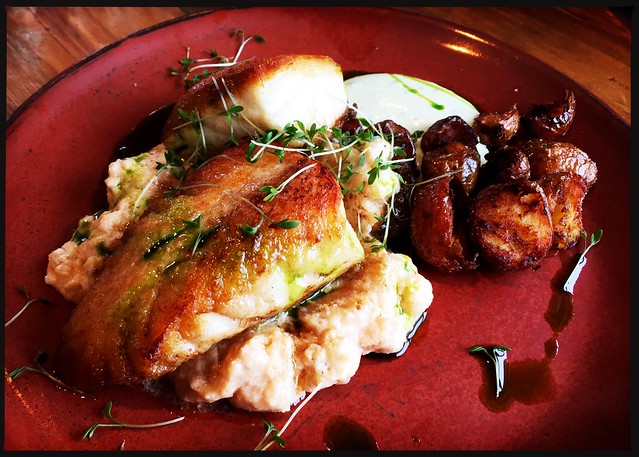 Stay at the Hotel Viking for a night or two

We split our trip into Iceland into two halves; the lets-take-bus-tours-everywhere half, and the let’s laze around downtown Reykjavik half. If you are doing the the bus tour thing, I suggest booking a few nights at the Hotel Viking in Hafnarfjordur, just a few miles away from Reykjavik. As the name implies, it’s a viking themed hotel with it’s own viking restaurant next door. The rooms were cheap and the food was amazing. For breakfast, which was included, they had a huge smørrebrød buffet full of homemade bread and pickled things. In the restaurant, you’ll be serenaded by a viking while you eat. 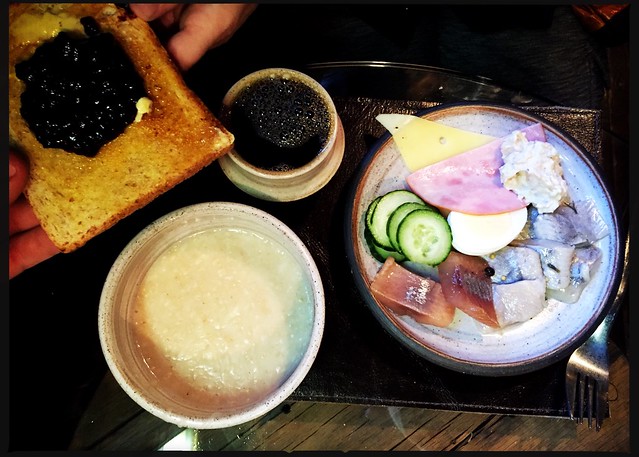 Hafnarfjordur isn’t a lively town, but you’ll be spending most of your days riding in some tour bus to a glacier anyways. So save some money and have a really unique experience in the Hotel Viking.

Sometimes called “The Black Death”, Brennivin is a spirit-forward liquor that’s unique to Iceland. It’s very different than the sweeter schnapps Icelanders tend to drink and has an interesting local history during the prohibition period.

I love Fernet, and rich herbal aquavits, so Brennivin was right up my alley! Bonus tidbit; you can pick up a bottle in the duty free shop in the airport for only $20! Do it for me! 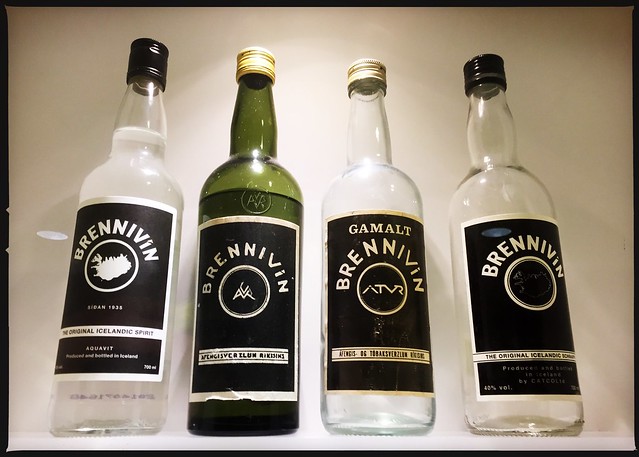 Iceland’s prohibition on alcohol began around the same time as it did in the states. However their ban on beer was not lifted until 1989. During the beginning of the trip, I struggled to find any beer I could enjoy. It could be that I just don’t enjoy lagers as much as IPAs, but most of their beers tasted like Bud Light to me. It turns out that most of Iceland’s beer is brewed at one megabrewery just outside of Reykjavik.

Luckily we stumbled upon Borg Beer, which is apparently a micro-brewery located inside of the Ölgerðin brewery (the big brewery that makes all the mainstream beers and alcohols). We took a the “Taste The Saga” tour through the brewery and were told that Borg is a passion project that keeps the big brewmasters working on small batch projects. No matter what style of beer your drink, if you stick with the Borg brand, you’ll probably like it better than anything else on tap.

Drink beer from the Micro Bar

If you are a beer lover, you need to visit the Micro Bar. This place is so underground, they don’t even serve Borg beer! Also, they are literally under the ground. They have like a million beers on tap, and they are all from very small local distilleries.

Get some great coffee from Reykjavík Roasters

Good coffee can be hard to find overseas, but if you find yourself in in Reykjavík, you should visit Reykjavik Roasters. The coffee and pastries are great here. If you need more coffee tips, here’s a handy list of third wave coffee shops in the area. 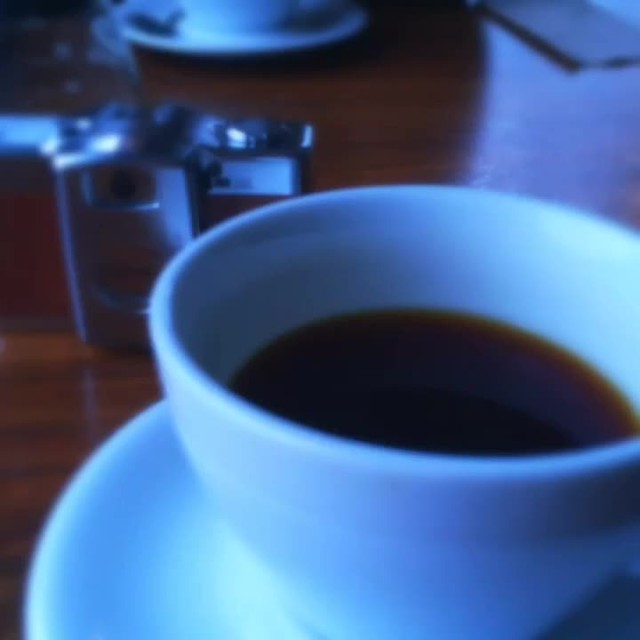 If I could recommend one place in Reykjavik, it would be Matur Og Drykkur, a small restaurant attached to the Saga Museum. It’s hard to think of what I liked better, their cocktails or their food… The name translates to Food and Drink, and both are equally amazing here.

Good cocktails can be hard to find in Iceland. The trends seem to be sweet syrupy drinks that taste more like candy than a drink. Matur Og Drykkur was literally the only cocktail place we found that provided unique and spirit forward drinks. Many of the drinks were complemented with homemade bitters and infusions. One of my favorite cocktails was a whiskey infused with lamb bacon 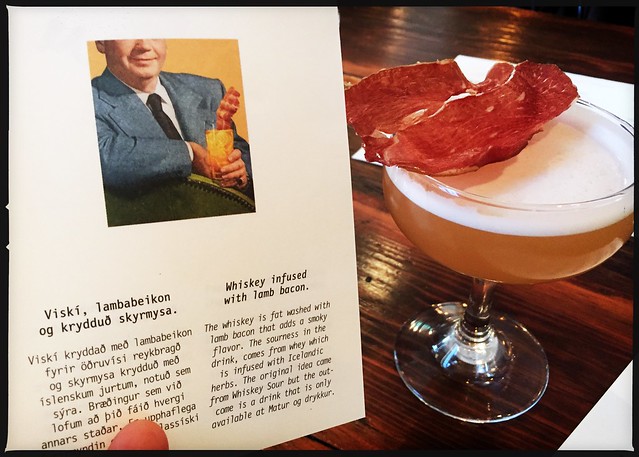 The food was daring, but always on point. During one visit, we tried some arctic char smoked in sheep’s dung, and on another visit we had a gigantic head of baked cod fish. There’s a dish for everyone here, not just the weird stuff. But when eating in Iceland, I recommend stepping outside of your comfort zone (and I’m not just talking about trying a piece of fermented shark from a tourist trap cafe). 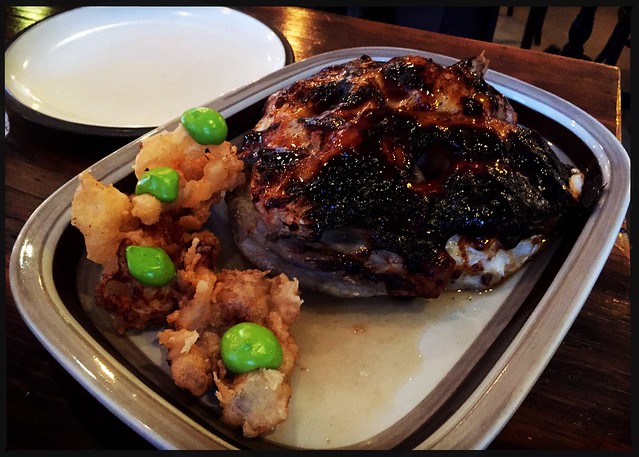 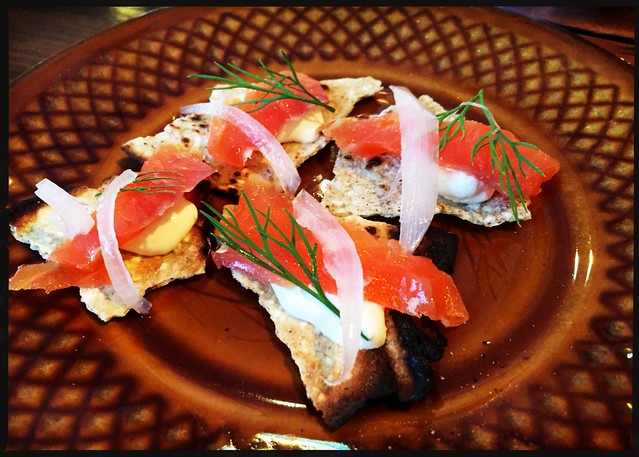 Seriously, this place is fantastic. Be sure to visit!

The best steak I’ve ever had was horse steak. It was juicy and flavorful and nothing like what I had always assumed horse would taste like. In most countries, we have a very complex relationship with the idea of eating some animals, but I’m so glad we took a risk and tried this delicious meat.

Pork and cattle are not very common here, so if you see “steak” on a menu it’s probably going to be either lamb or horse. Unlike most of the food we eat, horse is not factory raised for eating. Most of these animals live their lives giving tourists rides along the countryside. They are well treated and loved animals and near the end of their lives they have “one bad day” and become the best tasting meat you’ll ever eat.

Here’s a horse steak from Gamla Vinhusid Steakhouse in Hafnarfjordur (a few blocks from the Hotel Viking). 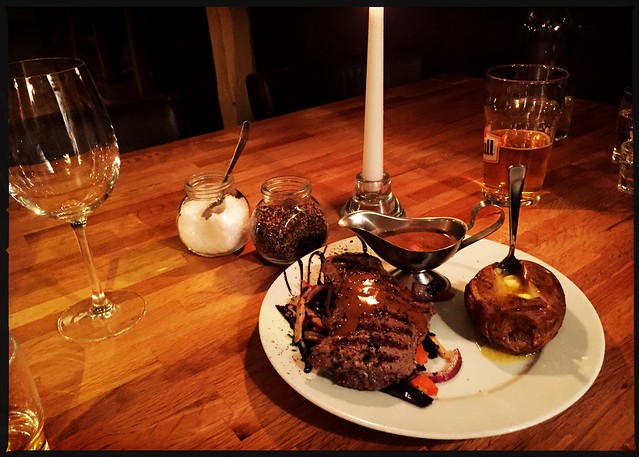 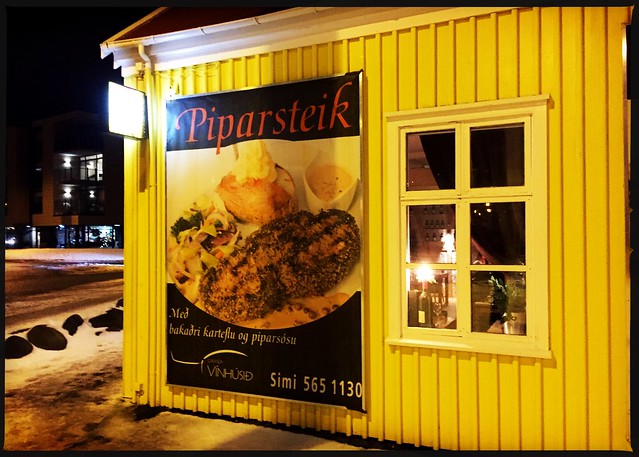 The Saga Museum is a cute wax museum in Reykjavik. It’s about a 45 minute guided audio tour through the history of Iceland and filled with all sorts of viking lore. Since you NEED to go to Matur Og Drykker, you might as well stop in here too, right? 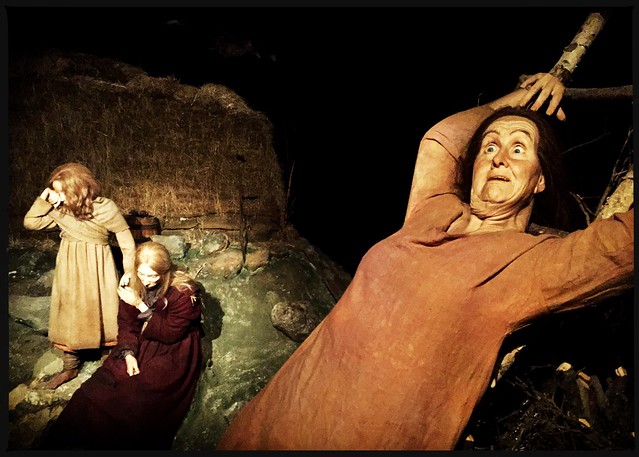 In Thingvellir Park, there’s a continental rift filled with nearly-freezing water. It’s called Silfra Tectonic Fissure and it’s really fun for swimmers at any level. It sounds terrifyingly cold, but it was really just like riding a raft in gently moving water.

Thingvellir is also just a beautiful park, filled with natural landscapes that look like they came straight out of Game of Thrones. In fact, many GOT scenes were shot there! 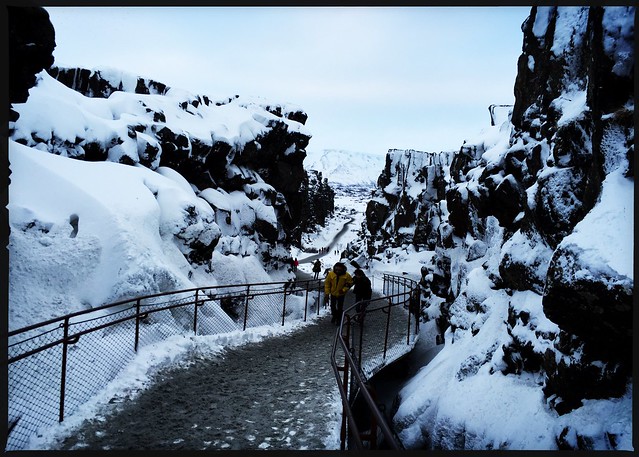 I’ve written about it more fully here, but I found some really great menswear inside the basement at Jormundar’s Thrift Store in Reykjavik. Beyond the good selection, Jormundar’s suggestions and style tips are what really made this a great experience. 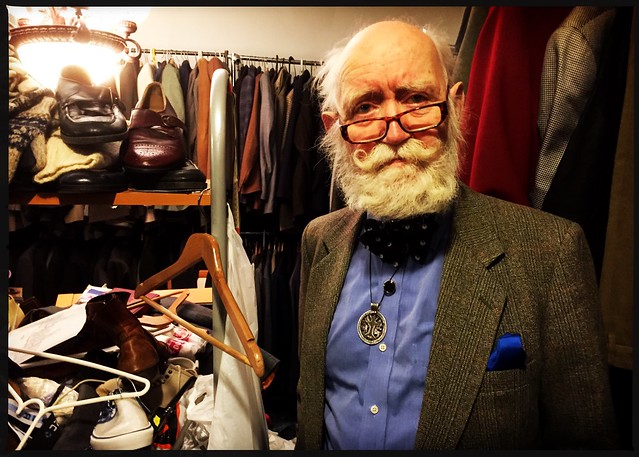 Walking around Reykjavik’s waterfront, you’ll notice an odd little mound with a shack on top. It’s an art piece called Thufa and it’s worth visiting at day or night. You’ll have a great view of the city and there’s a neat little surprise at the top. 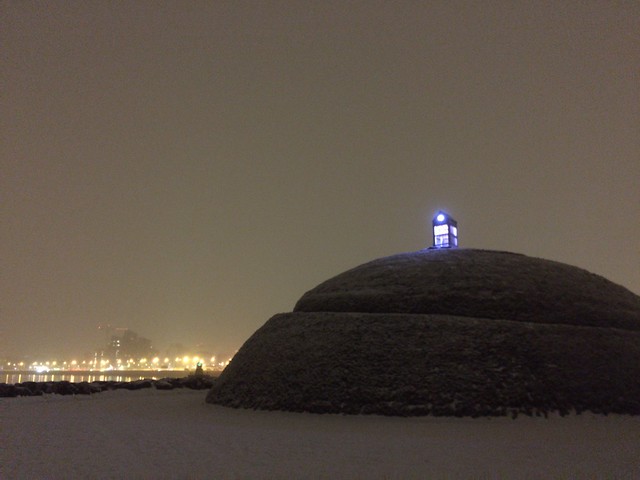 Explore the Harpa at night

The Harpa music center is a beautiful piece of architecture. I highly recommend visiting it at night, when you have the hole place to explore by yourself. 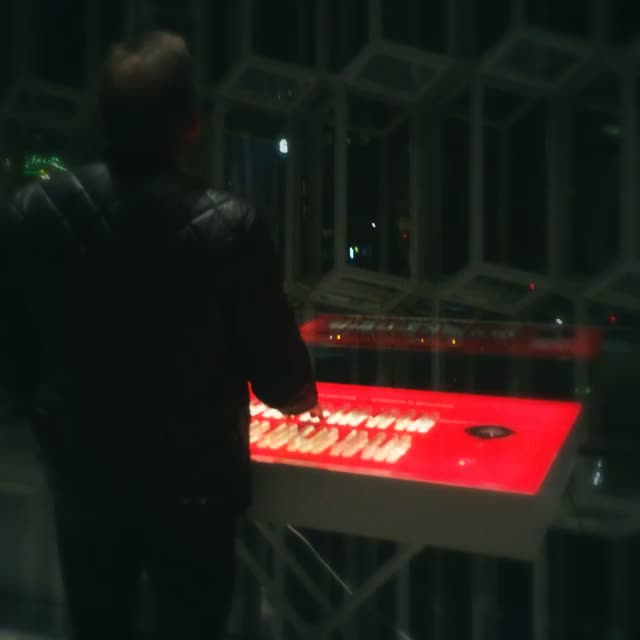 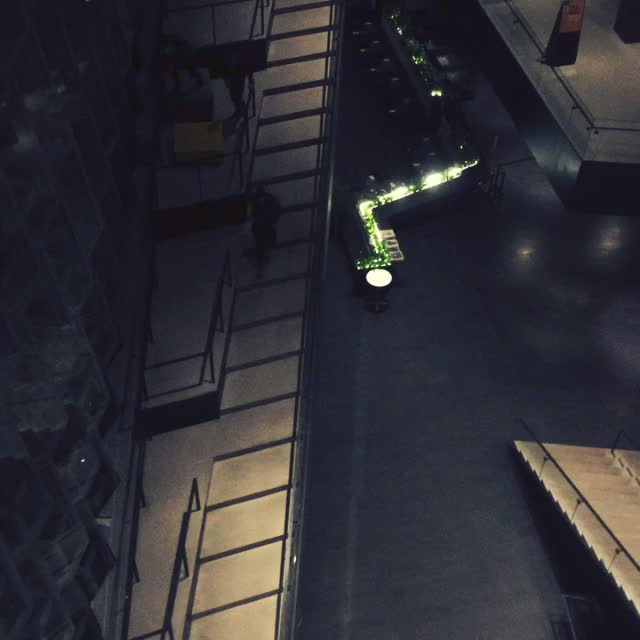 All of our glacier hikes were great, but my favorite also included a little ice climbing adventure. I’d never tried it before, but it was easy enough for everyone in our group could do. Here’s a pic of Christine during our “Blue Ice” hike on Solheimajokull glacier. 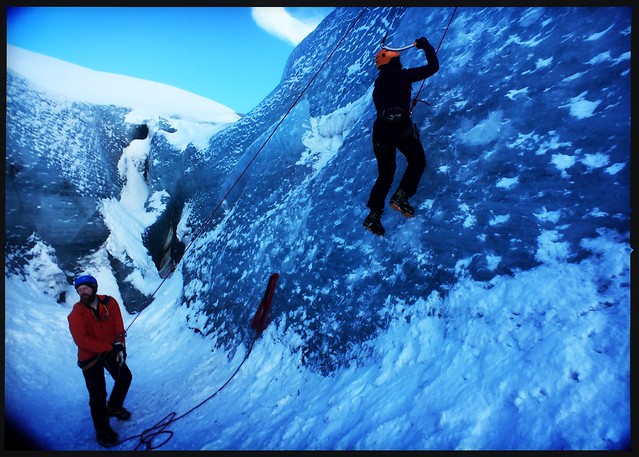 ← Is this the death of Seene?
What happens June 19th in Don’t Hug Me I’m Scared →